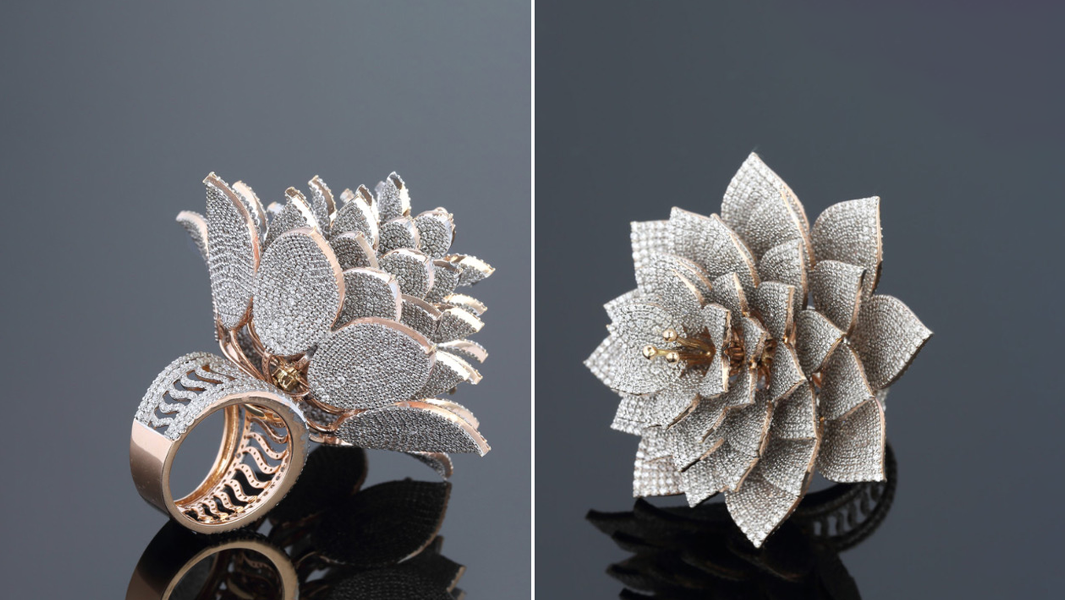 Imaginarium supported Kotti Srikanth in his quest to achieve a World Record for the most diamonds set in one ring. We were his manufacturing and jewellery specialists.

Kotti Srikanth, owner of the Diamond Store by Chandubhai, a unit of Hallmark Jewellers, Hyderabad, grew up surrounded by jewellery. In 2018, he was ready for a new jewellery related challenge - breaking the record for the most diamonds set in one ring with The Divine – 7801 Brahma Vajra Kamalam.

The process to design The Divine – 7801 Brahma Vajra Kamalam began in September 2018, and the design team ran through multiple iterations before deciding on the form of a flower (flowers are traditionally used as an offering to the gods, and are considered auspicious). The design team chose the Himalayan Camellia flower which provided the perfect balance between traditional and contemporary forms.

Once the design was formalised, the Diamond Store design team used computer-aided design (CAD) to figure out how many diamonds they would need to create the ring that they had in mind.

In March 2019, they got in touch with our Jewellery design and manufacturing team at Imaginarium to cast the ring. The ring was split into seven different sections, the ring and six petals, that would be held together with a stigma screw. The ring was initially printed in direct castable resin - an RPT (rapid prototyping technique) using Rapidshape - and further cast in gold.

While the ringbase was being designed, cast and fine tuned, Srikanth and his team set out to procure the diamonds. This process took a while as they wanted to make sure that all the diamonds were homogenous and ensure that were all conflict-free. The diamonds were set in the ring and the petals by employing a micro pavé technique that sets small stones in multiple rows over the entire surface of a design in a highly precise manner.

Once the ring was finished, Srikanth sent the ring to Imaginarium for us to ascertain and certify the number of diamonds set in the ring and to verify the cut, clarity and weight of each diamond. Our specialists dismantled the ring and counted the diamonds on both sides of each petal using specialised equipment.

Srikanth believes that achieving this record will encourage his team to create more masterful pieces. He now plans to offer more exclusive concepts and designs to patrons who visit his store, and export more of his designs to multiple countries worldwide!

If you have a special project that has special manufacturing requirements or you’re looking at customisation, manufacturing, setting or finishing of jewellery, write to us at hello@imaginarium.io and our team will be happy to help you!

The previous record for most diamonds in a ring was set in August 2019 by Mumbai based Lakshika Jewels with 7,777 diamonds on an 18k gold base.

Update: A new record for most diamonds in a ring was set in November 2020, by Meerut based Renani Jewels with 12,638 diamonds.