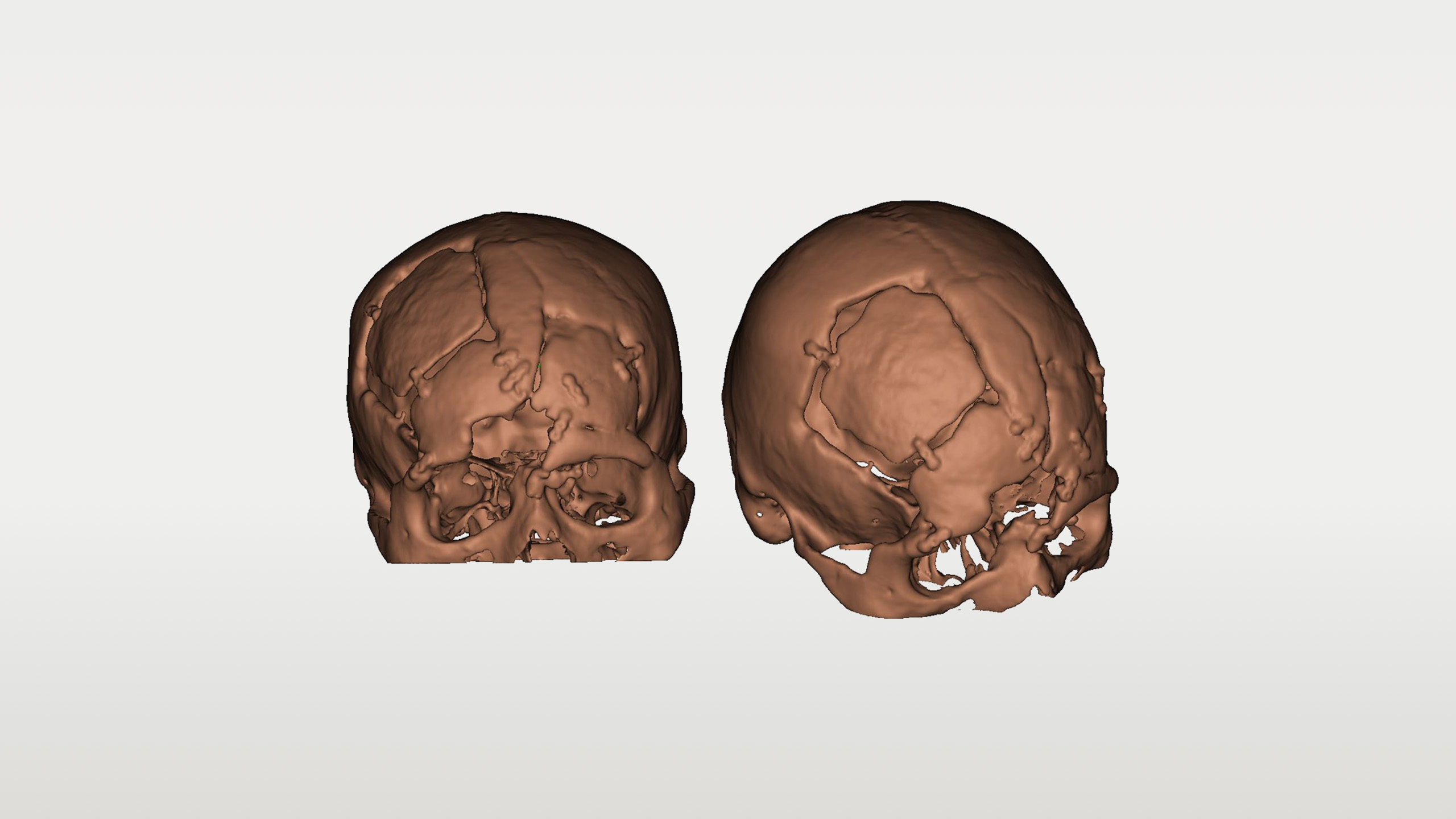 Serving in the CRPF, 25 year old Chopse sustained a gunshot to the head while on duty. The bullet missed his brain by a few millimetres, shattering part of his cranial bone and eye socket. Dr Neeraj Chandrakar, MDS - AIMPT, enlisted Imaginarium’s help to create a 3D printed anatomical model that would help him design a custom implant and plan a surgery to restore his cranium.

25 year old Chopse was serving in the CRPF (Central Reserve Police Force) as a paramilitary officer stationed in Chhattisgarh, when he was shot in the head by Naxals. The bullet penetrated his skull through and through, shattering the right side of his parietal bone, frontal bone and eye socket, missing his brain by a few millimetres. He was airlifted to Raipur where doctors performed an emergency surgery to reconstruct part of his cranium. While the emergency surgery was a success, he was left with frontal bone damage that extended till the nasal bridge which would require an additional implant for facial recontouring and a prosthetic eye.

After receiving emergency care at the Ram Krishna Care Hospital in Raipur, he suffered some amount of facial disfigurement due to shrinkage of the frontal bone that left the Nagaland native in low spirits. Chopse was no longer the jovial young man who mingled with his colleagues always ready with a joke. To help rectify the facial disfigurement that made him unhappy and conscious of his appearance, he started seeking out medical options to restore his appearance. He approached the hospital that performed his emergency surgery and they referred him to Dr Neeraj Chandrakar, an Anaplastologist, Maxillofacial Prosthodontist and Implantologist at Changing Faces India.

Chopse hoped that Dr Chandrakar could reconstruct his damaged skull and help him regain his confidence, and reached out to Dr Neeraj Chandrakar and set up a meeting with him. When Dr Chandrakar met Chopse, his heart went out to him and he took up his case at once. His experience in the field of maxillofacial prosthodontics and implantology led him to immediately think of 3D printing as an appropriate solution for Chopse’s needs. He explained to Chopse the two treatment options that they could administer - a custom fabricated implant in the laboratory or a 3D printed implant based on his digital data.
‍
When Chopse went through his emergency surgery, they reconstructed parts of his skull using a moldable graft. To make an accurate implant which would take the graft into consideration, Chopse and Dr Chandrakar chose to work with a 3D printed implant. By choosing 3D printing they could ensure that the implant would be perfectly designed, the surgery would be easier, and the surgery time would be shorter as compared to conventional methods.

3D printing a model of the skull.

Dr Chandrakar contacted Imaginarium Life and asked them to make an anatomical model of Chopse’s skull based on the DICOM data from his CT scan. The team at Imaginarium Life input all the DICOM data into the Mimics software where the segments were put through a simulation and an anatomical model of his skull was generated. As a part of Chopse’s skull was reconstructed using a moldable graft, the Mimics software helped the biomedical engineers at Imaginarium Life take the graft into account while making the model of the skull.

Once the virtual model was approved, the team at Imaginarium 3D printed the model in Nylon PA-12 using SLS. After receiving the print of the skull, Dr Chandrakar designed a custom cranial implant based on data gathered from it. Dr Chandrakar and Maxillofacial surgeon, Dr Biju Pappachan, used the model to meticulously plan each aspect of the surgery, like where to place the screws for the implants as well as the placement of the sutures. Although X-Rays, CT scans, and MRIs give doctors a lot of information, it does not provide them with the complete picture and 3D anatomical models using the patient’s data allows doctors to map out the surgery step by step in a more accurate manner to solve each case.
‍

The operation and the follow-up.

The model was cold sterilised, taken into the operation theatre, and constantly referred to by Dr Chandrakar and Dr Pappachan during the surgery. The implant was a perfect fit and the surgery took one and a half hours to complete, from anaesthesia to sutures and dressing - which was possible by utilising the anatomical model, without it, the surgery would have been prolonged. Sutures were removed 8 days after the surgery, and Chopse’s facial contours were back to normal within a month. Once the facial contours normalised, a prosthetic eye was placed in the reconstructed eye socket.
‍
Dr Chandrakar and Dr Pappachan were happy with how effortlessly the implant fit and the success of the surgery, which was performed free of charge. Elated by the reconstruction, Chopse got his smile and confidence back!

Our team of biomedical engineers can help you understand how 3D printing is becoming an integral part of healthcare. Reach out on hello@imaginarium.io for any queries or for your own patient-specific solution.