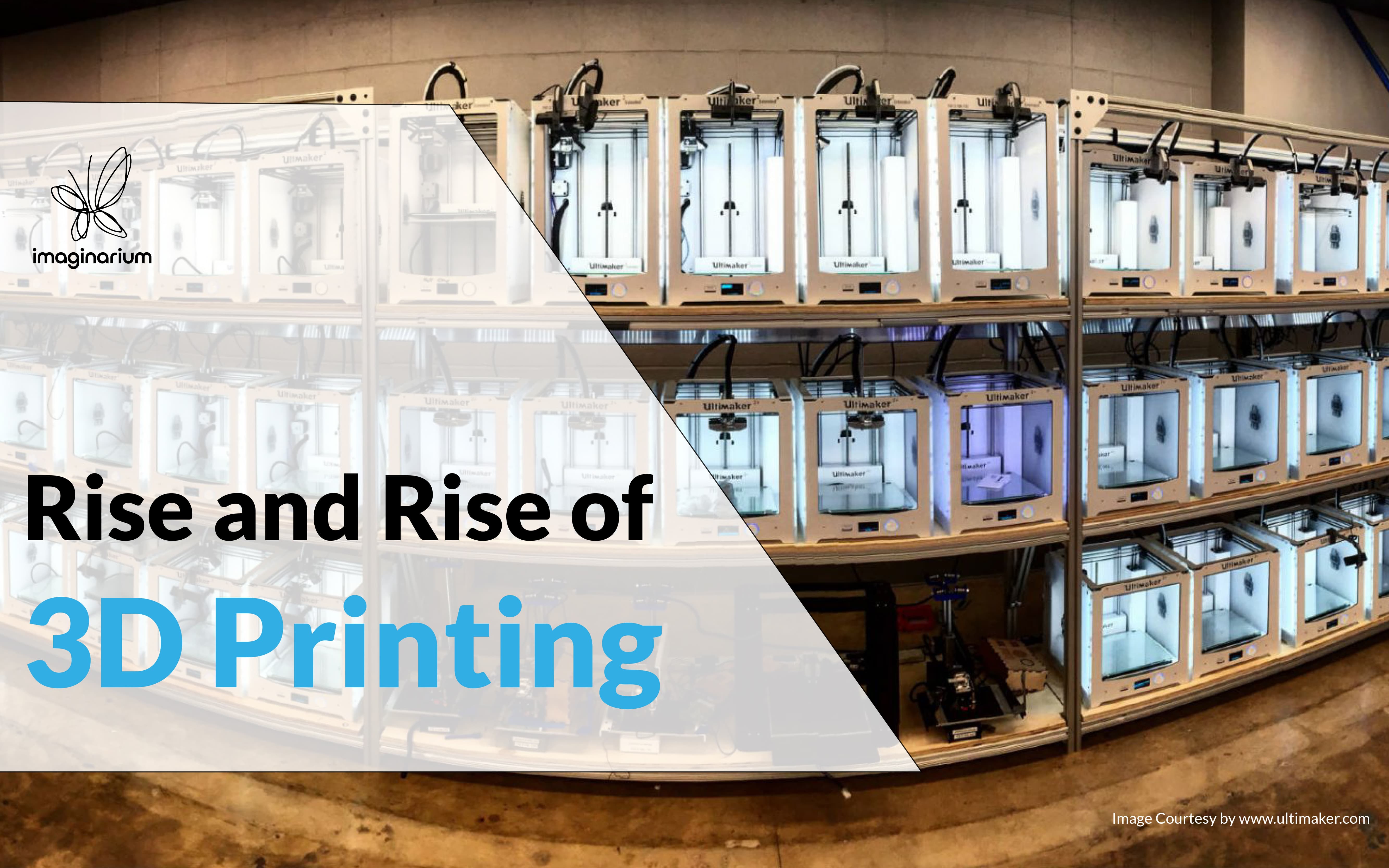 The Rise & Rise of 3D Printing

3D printing has been around for 30 years now but how did it come into existence? What was the need for it and what has it accomplished? Buckle your belts and sit tight as we take you through the journey that changed maufacturing forever.

As a step forward in our technological evolution, 3D printing is a revolutionary technology that allows anyone to create physical objects from digital designs. A technology that promises to break free from the constraints of traditional manufacturing and ushering in an era of unrestrained digital manufacturing. With 3D printing, complex designs that were previously unrealizable due to the constraints of traditional methods, can now be easily brought to life with minimal wastage and short turnaround time. And no, it’s not science fiction anymore.

It all boils down to the fundamentals for any manufacturing method. You see, every conventional manufacturing method of the 21st century falls under the collective umbrella of subtractive manufacturing. As the name would suggest, it involves subtracting material from the source block to achieve the desired shape of the product. By the means of cutting, carving and other similar machining processes.

3D printing, on the other hand, lies on the opposite end of this spectrum. Known as additive manufacturing, an object is created under this method by ‘printing’ layers of material on top of each other, using a machine that has been termed as a 3D printer. It’s akin to building a structure out of lego, only except that one gentle nudge will not make things go for tumble.

Curious minds may wonder how a 3D printer knows to print what it’s printing. The answer lies in 3D CAD files, the digital fodder for any 3D printer. These files contain three dimensional information of an object in the digital form; it’s shape, size, density and other whatnots. It is according to this data that a printer prints a real object. Materials that can be 3D printed today range from rubber, nylon and plastic to glass, metal and even food! In fact, recent developments in the field have given rise to a whole to new domain - that of 3D bioprinting, where 3D printers have been utilized to print living tissue and even completely functional organs!

3D printing has been around for a fairly long time. Designed by Chuck Hull of 3D Systems in 1986, the first 3D printer was used for commercial rapid prototyping, an application where 3D printing still continues to excel at. This 3D printer was given the name of SLA, or Stereolithography Apparatus, since it made use of UV lights to solidify photoreactive liquids to ‘print’ an object. SLA still continues to be one of the most efficient methods for additive manufacturing, with several other technologies and printable materials incorporated into the industry over the years.

So why are we hearing about 3D printing only now? Well, like most other everyday technologies, 3D is still in its nascent stages, even 30 years after it was first conceptualized. Take the case of cell phones. The first ever cell phone was invented in 1973, but it was only in the late 90s and early 2000s when it achieved global recognition. Since then, there has been no turning back. It wasn’t until 2010 that the concept of the modern smartphone took shape, and look where we have come in 7 short years! It’s only a matter of time before 3D printing blows up and invades our lives as the defacto for manufacturing and mass customization.According to Wohler’s Report 2016, the market size for 3D printing industry stands at $5.165 billion as of 2015, and is projected to surpass $30.19 billion by 2022. Since the design-to-market cycle of the technology is remarkably short, it is primarily being used for rapid prototyping.

Imaginarium, the largest 3D printing company in the country, was one of earliest adopters of the technology in India. Having worked with several major players in automotive, aerospace and FMCG sectors, Imaginarium Rapid has assisted product designs with rapid prototyping and batch manufacturing. You won’t realize it but the latest bottle of your favourite soft drink that you thought looks cool probably has its product design roots in rapid prototyping. Or perhaps the new fancy dashboard of the car that won the Sedan Of The Year award?  Yes, that was first ‘printed’ using 3D printing techniques and then sent for mass production after endless tests and multiple reiterations of the prototype. Rapid prototyping in consumer electronics? Check.

And it’s not just the stuff that happens behind the scenes, 3D printing can make everyday things look pretty cool too.  Jewellery is another industry where 3D printing has witnessed considerable acceptance and adoption. The level of creative freedom that this technology can afford is encouraging designers and manufacturers from virtually every lifestyle industry to tinker with 3D printing to bring their designs to life. You’d be surprised at the sheer volume of intricately designed jewellery that is 3D printed around the world on a daily basis. In fact, Imaginarium Precious introduced 3D printing in jewellery making and today it has become an integral step in the process, bringing a massive shift in the design paradigm of the industry.

Fashion designers are actively experimenting with this technology as well, we’ve worked with designers who wanted to utilize this technology to bring their designs to life, and they were more than happy with the outcome. Imagine walking into a fashion store, selecting a trendy design, choosing your favourite material and walking out with a set of freshly printed denims. Better yet, imagine doing all of the above from within the comfortable confines of your own home!

3D printing is also making its presence felt in healthcare. More and more people are recognizing the need for patient specific solutions. Imaginarium Life has engaged with a number of doctors from around the country and introduced them to the power of this technology when it comes to saving lives. 3D printed implants, surgical guides and prosthetics are only some examples how the technology is literally changing lives. And sheltering lives too; the technology is no stranger to civil architecture. Entire buildings can be assembled in incredibly short spans of time, all that’s needed is the right 3D printer. And it’s happening as we speak.  Companies like Apis Cor have printed houses within a day, with costs running as low as $10,000 per house. Who did you think was gonna construct houses when we finally colonize Mars? Men? Nah.

3D printing as a technology is unparallelled in its scope, which is only limited by human imagination. Designs that previously could not be reproduced in physical form, owing to the constraints of subtractive manufacturing, are now being realized throughout the world. But to realize its enormous potential, 3D printing has to face 3 major hurdles. The hurdles of Awareness, Acceptance and Regulation. A good percentage of manufacturers are still oblivious to this technology, and the ones that do know about it are often hesitant to incorporate it into their businesses. And then there’s the subject of regulation. The uses of any emerging technology are often accompanied by misuses, and the same applies for 3D printing. There is a need for regulating and standardising manufacturing practices within the industry. Policies need to be set in place that will both curb misuses of the technology and also encourage mass adoption. While India may not be the leader in the industry, it is witnessing a remarkable increase in the level of awareness and adoption of this technology. 3D printing perfectly encaptures the spirit of Make In India; after all it has the potential to bring the power of manufacturing to every home. And not just that, it gives the end user complete control over the specifications of a product, be it design, production or customization.

As pioneers of this industry in the country, Imaginarium has learnt first hand the challenges and excitement of introducing this technology to hitherto low-tech sectors. It aims to democratise the access to Digital Fabrication and Advanced Manufacturing for everyone in the country. Imaginarium has always been open to engaging with designers, makers and ideators, and invest in bringing their ideas to life. It is actively investing in tools and technologies for building seamless, intuitive interfaces thats lets anyone get from idea to product in the shortest possible time. Opening up of knowledge, experiences and resources is the only way to boost the Indian 3D printing industry, and usher in the full potential of Make In India across the country.

From 2D to 3D - Turning Doodle Art to Printed Part